Yu-Gi-Oh! has made a habit of altering the artwork for cards when printing them for International release. A few of these alterations have been pretty controversial and drew more attention to the cards and their changes than the original artwork might have garnered. The following are a few of the ones that rise to the top for me but you can decide for yourself. Feel free to join the conversation in the comments section below!

Dark Magician Girl's card changes have been a long-lasting point of contention amongst Yu-gi-oh fans as she has been part of the game from the very beginning. Not only was her cleavage edited to be less suggestive/prominent, but the pentagram on her dress was removed entirely and replaced with a shiny red stone. This makes Dark Magician Girl a controversial card for two reasons: first she was censored for being too suggestive, and the pentagram was censored for religious connotations.

The Japanese artwork for Last Day of Witch features several “witches” on their knees with their hands tied behind their backs as guards look on in a menacing fashion. To make matters worse, there's a wooden cross with kindling at its base in the foreground, suggesting these women are going to be burned at the stake. This image was removed entirely and replaced with a cartoonish image of a cartoon witch. This is probably one of the most drastic examples of changes to a Yu-gi-oh card for International release.

This Trap Card can be used to either banish every card in the opponent’s graveyard from the game, or send the same number of your own cards to the graveyard on the outcome of a coin flip… Chill, Konami. However, the key thing here is how beautifully horrific the original art was. The more you look at that image, the weirder and more disgusting it gets. The replacement is a much tamer version that and again, takes on a more cartoon-like appearance. The entire mood of the card is altered and in my opinion, not in a good way... I wonder how long censors had to look at it before deciding it needed a rework?

What's going on with that art? The Japanese edition of Tragedy depicts an ominous-looking guillotine. For the international release, this was changed to a shady-looking creature stalking a young woman. Clearly this censorship for a card really didn’t work and, in my opinion, made the card even scarier or at least equally disturbing.

You can also appreciate the nerdly literary reference to Dr. Faustus, Christopher Marlowe’s play about a scholar who trades his soul to Satan for the ability to use magic. The thumbs on this one were swapped between the Japanese and International releases for pretty obvious reasons.(Because he has thumbs that look like… well they don't look like thumbs).

Well to keep with the theme of weirdly censored cards… this one really just speaks for itself. I’ll give you a second to see if you can spot the difference… Take a look at the character on the right side. He's wearing a pretty revealing g-string in the Japanese version but in the International version is now decked out in a kilt.

The Japanese art for this card features a tapir sleeping peacefully while holding a bottle of sake. There are several other bottles and cans of beer and sake scattered around Bagooska's feet. To avoid promoting alcoholism or drinking , the international version of this card replaced the bottles and cans with pillows. Instead of looking like a drunkard dozing after getting too drunk, Bagooska's international card art looks like a cozy tapir having a nice nap.

The artwork on this card is the stuff of nightmares! It is gruesome and graphic and does not mess around. This is probably by far one of the scariest cards in Yu-gi-oh with the image of this parasite burrowing through your skin like that. The International version is much tamer with no reference to what the parasite would do to an unsuspecting victim.

Vampire baby is just the most horrifying card to exist. Honestly, do I need to say more? Definitely among the weirdest and most terrifying arts in Yu-gi-oh. 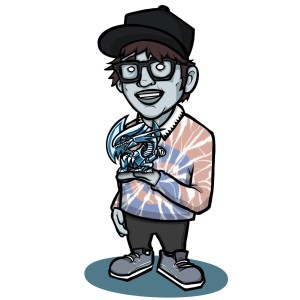